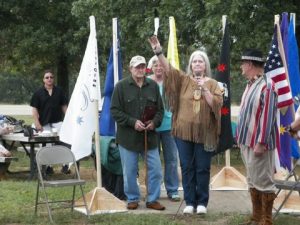 The next Tribal Council Meeting will be on June 13, 2020. It is to be held at the Union Bank of Mena on Hwy 71.  The meeting will take place in their meeting room in the back of the bank. Doors will open at 12:30 but the meeting will begin at 1:00 pm. Come to visit and get the latest updates from Speaker McKay.  Hats and t-shirts will be available.

Our Fire Keeper has announced our Spring Sacred Fire. This is the time when the Fire is opened and we renew our relationship with our Creator. Even if you cannot attend the Fire….renew the Fire within you and your relationship with “Yah”.  The fire will be held at our ancient mound at Taylor’s Ferry,  just outside of Wagoner, Oklahoma. I will post directions closer to Fire. It will begin at dusk. Please bring a lawn chair, blanket, water, etc. It can be cool, as we will be on the edge of the lake.  Once the Fire begins, please remember to be quiet and respectful. No eating, talking or smoking is allowed after the ceremony begins. There are bathroom facilities a short walk away.

Keep in mind all of these dates may be canceled due to the Covid-19. We will  just have to wait and see what the restrictions are at the time!

Check out the Calendar of Events to see a listing of all events currently scheduled.